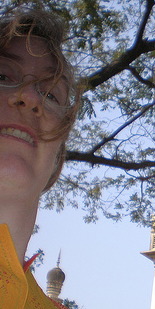 Other Parts of Life...

I have a blog.  It started out more personal (as open letters to my family) but increasingly has professional content.  I basically write there things that I'd kind of like to write a paper about but know I'll never get to doing that formally, or that I'd like to write as a magazine or newspaper article, but I've never gotten around to figuring that out.  Some of the entries are still more like letters to no one in particular.

I also have RSI, clicking there will get you to a good information server about typing injuries. I have a datahand keyboard, which is how I type, and a Wacom graphire tablet, which is how I point.  If I'm not in my office, I can't always type very well, so apologies if you get stilted or late email off me sometimes.  More info on RSI: Jane Greening and Bruce Lynn at least formerly of UCL demonstrated that RSI is nerve damage, which is useful for legal claims.  If you are in Boston, you might want to join The Coalition on New Office Technology.  Janet Cahn's Media Lab RSI Page is also very helpful, especially the "What I learned at MIT..." part.

I enjoy sports, although I'm not good at any.  I'm not one of those people who just says they're bad, I really am uncoordinated, but for some reason I enjoy things anyway.  At MIT I played soccer with  The Cold Booters  (I founded  their C-league team) and  D-league ice hockey with the Halting Problem in 1995 & 2000 (I got to play D league 2 years because I never learned to skate).  In Edinburgh I managed to find 3 different weekly bad soccer games. When I first came to Bath, sometimes the Math & CS grad students let me play football with them, and Marina De Vos played squash with me, but then I ran out of time for that.  More often I hill walk (mostly to work in Bath), cycle (mostly to work in Mannheim) and play very occasionally play ping pong.

Every wonder what was on the Bath Logo?   I did.

I was stunned to learn that I have an MP3, from my usenet music days. I never could play lead, even pre-RSI. You really can find anything on the net. Maybe I should start collecting art, well, art links.

So what did you think of MIT?  That's not actually what I thought, but it seems a pretty good answer anyway.  If I'd actually been male & undergraduate, I probably would have joined TEP, rather than the relatively mainstream sounding frat the above guy was in, but it's difficult to survive MIT without some kind of a housing group.  I survived because of Pearl Tsai (now Renaker), Eva Patalas &  Elizabeth Wilmer.  For something more like my actual experience as an AI lab grad student from the 8th floor, check out the GSB archives.

Politics... Since I'm a US citizen but live abroad I vote at my last US residence, which is in  the City of Cambridge, Massachusetts.  My US congresspeople are Elizabeth Warren (no number yet, Ted Kennedy's was 565-3170), John Kerry 565-8519 and Michael E. Capuano 621-6208 (Rep for Cambridge and Somerville). Write your U.S. Representative. Click here to find out where to vote if you are in Massachusetts. Cambridge Civic Journal.

For a long time, this bit of my web page said "I'd like to have a president who believes in science", but I've now raised my sights to having a president who understands science.  And I'd be happy to help!  I campaigned for Senator Paul Simon for president in 1988, Al Gore in 2000, and  Robert Reich for Massachusetts governer in 2002.  None of them won, but they sent me to Des Moines Iowa,  Oberlin Ohio, and Worcester Massachusetts, respectively, which was at least interesting.

A couple of good causes:

My partner Will's & my Charity of the year:  Updated 2014: since 2010, our favoured charity has been the American Civil Liberties Union (ACLU).  This is because all power corrupts, but the ACLU supports the rule of law (e.g. on-line privacy, trials for those accused of terrorism).  Actually, I've been a card-carrying member for years.  We are no longer supporting Amnesty International, because of its unquestioning, amoral, sensationalising support of people like Moazzam Begg.  Just because the USA wronged someone doesn't make them right.

See also my page on  Information for Americans.

The Better Business Bureau has online reports about (at least American) charities. The Consumer Price Index lets you compare prices and wages across years. Are you interested in US Constitutional Law?

My Past... In case you are trying to figure out if you know me, or if you just want to know about some really cool people and places, here's my life's history:

I am late of  Marc Hauser's Lab at Harvard, the MIT AI Lab, the Division of Informatics and the Department of Psychology of the University of Edinburgh, LEGO both Futura (Boston Branch) and Digital / Darwin (Billund, Denmark), Marble Associates, LaSalle Street in Chicago, The College of the University of Chicago, and Glenbard North Highschool (I started 2 years after these guys graduated!), Saturday morning physics at Fermi Lab, Jay Stream Jr. High and Roy De Shane Elementary School.  My three schools were all in Carol Stream, Illinois (I lived on this street from 1970-1982.) I spent the late 60's in Omaha, Nebraska (but I don't remember them,) and I was born in Milwaukee, Wisconsin, like Herbert Simon.

Do you need a foundry? (do you want your sculptures in brass?)  My best friend from highschool, Amy Sterly works there...

Quote of the random time interval:

"It's easy to lie with statistics, but it's easier to lie without them."

Old quotes are here.   Old web pages are there.

[Since Spring 1994] The guys at the Computer Vision Group at Trinity College Dublin first harassed me about not having a Web page, so now I do, and in return I'd like to suggest the world drop by and ask Gerry Lacey where's the best place to go for a pint.

[Since Winter 1996] I must acknowledge Will Lowe, though I can't say for what in public. (Parse that in British!)

[February 2002] CPI info is from Will Miller's home page.

[Since January 2003] My front page uses CSS style sheets. It is based on the old CSS home page, by Bert Bos. If you have any problems with it, let me know, or try a more CSS compliant browser, like Mozilla (any version greater than 0.8). Far cooler CSS stuff.

[January 2004] Behind this woman is  Dr. William Lowe. Let it be known that Will taught me most of what little I know about science, philosophy and matlab (and history); he does fascinating research into both semantics and politics; and without whom I wouldn't be breathing (so heavily).

[January 2004] The woman in front of Will and me taking the picture is Marty Bryson.

[April 2007] Photo on the front page is now by Will Lowe (coincidently.) The one on the top of this page I took myself, sort of.

[August 2008] Thanks to Paul Albers for pointing out that "jjb ahhht cs daht bath daht ac daht uk" doesn't make sense if you're not phonetically fluent in American English. I guess confusing computers without confusing people is getting harder -- we must be winning at building AI!